Sichuan is a wild, beautiful mountainous province in south West China famous for its spicy cuisine and its cute Pandas.

Sichuan is a highly mountainous province with the tibetan himalayas to the West. The eastern part of the province is within the fertile sichuan basin. Western sichuan comprises mountains forming the Qinghai-Tibet plateau. The yangtze river flows through the mountains of western sichuan.

The provincial capital Chengdu has no shortage of training schools, colleges and universities looking for qualified TEFL teachers to Teach English in a classroom environment. Additionally there are increasing opportunities in other cities including Deyang, Suining and Meishan.

The province is a beautiful natural landscape. The stunning mountain of Emei shan 2 hours from Chengdu is a hugely popular tourist destination. Also in Chengdu its self is the national panda breeding research centre, this is the best place on the planet to visit the giant panda. Additionally the beautiful national park of Jiuzhaigou valley famous for its stunning scenery is popular among tourists.

Sichuan cuisine is known as one of the four great traditions of Chinese cuisine and contains a great deal of hot and numbing spices. The food is well seasoned with a broad range of spicy flavours. Local specialties include dandan noodles and kung pao chicken. The foods are generally hugely popular and famous throughout the whole of China.

The Sichuanese people originate as a sub group of the ethnic majority of Han Chinese. The Sichuanese speak their own dialect of sichuanese mandarin. 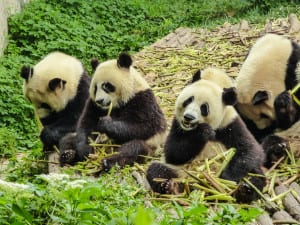